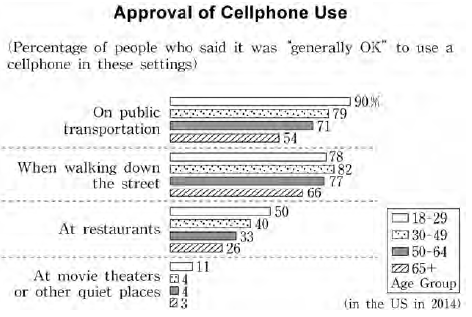 The above graph shows the percentage of Americans in different age groups who said it was “generally OK” to use a cellphone in different settings in 2014. ① In the setting of “On public transportation,” the younger groups are more accepting than the older ones regarding cellphone use. ② “When walking down the street” is the setting in which people aged 30-49 are more permissive towards cellphone use than the other age groups. ③ As for “At restaurants,” 50% of the 18-29 year olds answer that it is acceptable to use cellphones while 26% of those 65 and older say the same. ④ Only 4% of people in each of the two age groups, 30-49 and 50-64, agree that cellphone use is acceptable in the setting of “At movie theaters or other quiet places.” ⑤ In the same setting, less than 10% of people in each age group answer that it is acceptable to use cellphones.