When were the first coins made?

The first coins were made in the seventh century by the Lydians in Asia Minor. They had fixed proportions of silver and gold. The coins were stamped with the issuing authority’s symbol to avoid forgery. They were about the size and shape of a bean and were known as “staters” or “standards.”

The Greeks and Romans adopted the idea. Roman coins were usually stamped with the head of the current emperor on one side and a mythological subject on the other. They were also dated. So, Roman archaeologists find coins very useful in helping them date other finds. 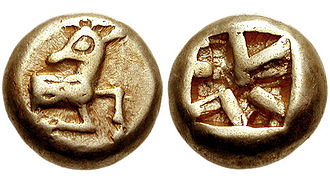 *New England shillings were the first currency in America. The English government strictly regulated the coinage.