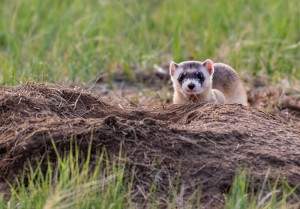 In December 2020, the weasel world welcomed a cloned black-footed ferret named Elizabeth Ann. She became the first of any endangered native North American species to be cloned. In a few years, Elizabeth Ann might have siblings. The successful cloning is promising, because it offers hope that cloned animals could help save species from extinction. Extinction occurs when every member of a species of a living thing has died.

In 1981, ranchers in Wyoming discovered a population of more than 125 black-footed ferrets. Over the next several years, many of these animals died of a disease called distemper. To keep them from dying out completely, the U.S. Fish and Wildlife Service and the Wyoming Game and Fish Department captured the remaining animals. Scientists have successfully bred the ferrets in captivity. In 1991, they began releasing captive-bred ferrets into western grasslands that were home to prairie dog populations. The ferrets began reproducing again in the wild.

The black-footed ferret is not the first animal to be cloned. Scientists used a technique called nuclear transfer to clone such amphibians as frogs and salamanders as early as the 1950′s. In 1996, a group led by the British scientist Ian Wilmut used the procedure to clone a sheep. The sheep was the first mammal cloned from a donor cell from an adult mammal. They named the clone “Dolly.” Since the cloning of Dolly, scientists from many countries have used a similar technique to produce clones of mice, cattle, cats, and other mammals.